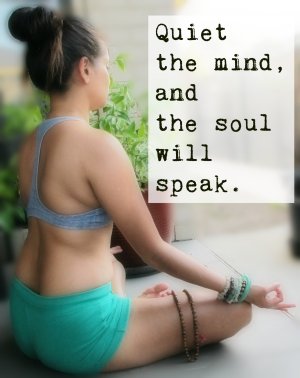 I meditate. Morning and night and anytime in between if desired. One of the questions I get asked a lot is how do you find time to do it? My response – do you have time to breathe? It really is that basic, well it is to me at least and as I believe meditation should be an essential part of every soul’s journey I’ve set about debunking (love that word) some commonly held myths about meditation – myths I myself held at one point in my life – and by doing so just maybe (if you haven’t already embraced it) convince you to give it a try.

I currently meditate 43 minutes first thing in the morning and eleven minutes before bed and in between I add in mini meditations (one-three minutes) just to bring some awareness into my day. Now it comes easy but it took years for me to get into this routine, I chose to commit then made a conscientious effort to keep at it. If meditation becomes a priority in your life, you will find time for it. Start small, even just a few minutes at a time is better than no minutes.

Myth No. 2: I can’t because… I can’t be sitting crossed leg. The lotus position is the ideal position to sit but it is not the only acceptable position. The Lotus Pose or Padmasana is the über pose when meditating because, by aligning the spine and opening the channels that run through the centre of the body, upright sitting encourages an unimpeded circulation of prana (energy); which in turn contributes to wakefulness on all levels — physical, mental, and spiritual AND it is a very balanced and symmetrical posture, which means the body can be held motionless with the least distractions.

However lotus position does require open hips and a lot of practice seeing as most of us won’t have sat cross legged much since leaving school. Meditation is meant to be calming and relatively easy so if lotus causes discomfort in any way you can stand up, sit on a chair or even lie down (just watch you don’t fall asleep), just as long as your spine is reasonably straight.

Myth No. 3: I can’t because… I don’t think I can still my thoughts. There is this idea that meditation is about banishing or controlling thoughts but just like you cannot stop hearing you cannot stop thinking. Try it. The more you resist the more it persists. The practice of meditation is to observe what happens in the mind in a non-judgmental way, and by focusing your mind on something else (an image, mantra, your breathing) you consciously withdraw your attention away from these thoughts, this allows the mind to slowly calm down. Anytime you catch your monkey mind wandering then you bring it back to the present moment (to your meditation) again and again and again and again. As you continue to practice, in time you will notice that although thoughts are present you aren’t getting lost in their content.

Myth No. 4: I can’t because… It’s not for me. For years I held the preconceived idea that meditation only worked for the devoutly religious or tripped out hippies and whilst being a tripped out hippie has always appealed to me, even as meditation grew into a global widely known practice I stubbornly resolved ‘I wasn’t that type of person.’ However it is my belief that you can talk yourself in or out of anything, so if you think meditation isn’t for you than it probably isn’t but I think if you feel a calling for it like I did or just simply want to give it a go – then it is absolutely for you. There is no right type of person when it comes to meditation. All that is required of you is that you show up and commit to the practice.

Myth No. 5: I can’t because… I would feel silly chanting. Then don’t or do and feel silly anyway. There are so many types of meditation and ways to meditate, some involve chanting of mantras but there are plenty others that don’t. I have a friend who says running is her meditation and another who says he feels he is meditating when he is out hiking. At different stages of my study I have learnt mindfulness meditation (non chant), mantra meditation (chant), guided meditation (non chant), kundalini meditation (chant) and transcendental meditation (chant). That said don’t discount the merit (and fun) of chanting altogether, the silliness won’t last but the feel good sensation you have inside will. I’ve always found when I take myself out of my comfort zone that’s when l thrive.

Myth No. 6: I can’t because… I’m already a better person Maybe you are but isn’t there always room for improvement. Meditation came into my life when I was living an unhappy chaotic existence. I’ve mentioned previously that it was calling, I’ll explain why. Years ago I was walking down the high street near my home and I walked passed a monk, not an usual occurrence I didn’t live near temple or anything like that, so he was noticed by moi. Next day same again, this time he smiled at me. Then the next day I said to myself before leaving home ‘I wonder if I will see that monk again.’ I walked along the same street looking out for him but to no avail so I went about my business and forgot about him. Three hours later eight tube stops away I bumped into him outside Pizza Express in Baker Street. He caught me staring at him, we smiled at each other as if acknowledging a comrade. That night and for the following four nights I dreamt of that monk, each time he would be in meditation. After that fifth night I woke up feeling a call to meditate, I actually said out loud ‘that’s what I’m going to do.’ I never saw that monk again in real life or in my dreams.

To put this story into context at this point in my life I was looking for something – meaning, purpose anything… I’d read so many books The Art of Loving, The Celestial Prophecy, The Secret, a little Eckhart Tolle, Deepak Chopra, Thich Nhat Hanh and on and on, learnt The Kabbalah(some), seen tarot card readers and psychics, dabbled in yoga but hadn’t found a practice I enjoyed yet, had my astrology chart done, you name it I was trying it or at least thinking about trying it – all the while I was ‘finding’ myself  I was also engaging in destructive behaviours – nothing was sticking. Then I had this experience and I just knew. Something had finally stuck. It was one of those moments I could feel the universe had my back. Does meditation make me a better person? It definitely helps. I found my way in meditation and my regular practice leaves me feeling energised and this incredible feeling filters through into all areas of my life. I see it as an addenda like eating greens and drinking water.

I find myself going into a meditative state in the most unlikely places like when I’m dancing or more recently colouring, as in colouring in books (yes its a thing, adults do it now too) and that’s because there are no rules when it comes to meditation, no right or wrong way, all it takes is commitment but then so does anything worth having in life.

Also this week: Gold for Jessica Ennis-Hill at World Championships in Beijing, whop whop! #WonderWomanlives • And while we are in China… how about that stock market! Aiya! #DominoDancing • ‘Straight Outta Compton’ in memory of my brother’s pet frogs Dre, Tupac, Snoop and Warren G I think I want to see this movie #BoyzntheHood #OldSkool • 1D to split, to you fans – I feel your pain, I went through it with Wham #ItDoesGetBetter #1DAnonymous