Recently I spent time with a very old friend and while we talking and drinking our zillionth cup of tea, in the background the film How to Steal a Million(1966)▪ came on. I screamed out a big whop of joy and exclaimed ‘remember when we first saw this?’ She looked at me and replied ‘I’ve never this before.’ I opened my mouth to describe the the moment but then I realised my memory was muddled and I was referring to a mutual friend, so instead I was like ‘oh you have to watch this, it’s gorgeous.’ We watched it, she loved it.

Ask me what my favourite film is and I couldn’t pin down just one but the ones I adore seem to have been made before I was born, and all have an ‘opposites attract’ theme. Eternal romantic – that’s me. The rom-coms of today have nothing on these diamonds: 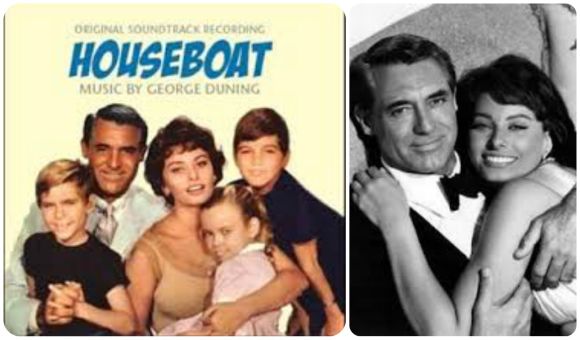 Houseboat(1958) This family friendly film is about a widower who employs a runaway socialite to be a nanny for his children on his houseboat. It combines whatever it was that made Cary Grant well, Cary Grant (the personality, charisma, accent, presence) with the fire brand that is Sophia Loren, the chemistry they give off is electrifying. It is a fun film – the characters are fun, the story is fun, the songs fun, the setting of the houseboat fun – perfect for watching on a rainy afternoon.

Barefoot in the Park(1967) This gorgeous film is about what happens immediately after the honeymoon if you are a free spirit and your new husband is a straight laced lawyer. Their differences becomes apparent when he declines an invitation to take off his shoes, to walk barefoot in the park (hence the film’s title). It’s lightweight, genuinely funny and the pairing of Jane Fonda and Robert Redford is pure magic and the supporting characters provide plenty of comedy.

Guess Who’s Coming to Dinner(1967) I’ve had an ardent interest in the Civil Rights movement ever since fifth form History and that is why I was drawn to watch this film the first time, as it addresses the coupling of two people who happen to be of different race and the prejudice this brings up during 60s America. Even with this serious undertone, it is not a heavy film and there are plenty of comedic moments, but ultimately it really is just a film about love. The cast includes heavy weights Sidney Poitier (the ultimate class act) and real life couple Katherine Hepburn and Spencer Tracy. What makes this film outstanding is that at some point you realise, Katherine (Hepburn) and Spencer (Tracy) are not even acting  – they are relaying their true feelings for each other. (Spencer’s final speech about love for his character’s wife, tears me up every time).

The Way We Were(1973) More Robert Redford, this time playing carefree WASP Hubbel Gardiner and the incomparable Barbra Streisand as Katie Morosky, a politically active Jew. I wrote an essay about this film once and at 1000 words there was still more to be said, so to sum up this film in a few lines is nigh impossible so instead I shall steal from Carrie Bradshawº ‘The world is made up of two types of women; the simple girls and the Katie girls, I’m a Katie girl.’
Then there is that song ‘hmmm hmmm memories, light the corners of my mind, misty water coloured memories of the way we were…’

Whether it was the story lines, acting, chemistry of the couplings or the songs – one thing is clear they don’t make them like they used to but we are so fortunate that they made them in first place. Now over to you, let me know your favourite films of yesteryear in comments.